Over the past few months, I’ve been fortunate to see stunning examples of southern design in the form of Showhouses. From Atlanta to New Orleans, and soon the Junior League of Chattanooga Designer Showhouse in Chattanooga. Recently I participated on a Southern Bloggers Panel in New Orleans as part of the Southern Style Now Festival sponsored by Traditional Home. The center of the design events was the Showhouse, an 1895 Queen Anne Victorian transformed into the design equivalent of a modern day Cinderella. From a total cottage renovation to re-imagined spaces in the main house curated by 27 talented designers, of whom have redefined traditional design in infinitely refreshing and innovative ways.

Luckily there is still time to visit this brilliantly decorated home because the Southern Style Now Showhouse is open until June 12th, 2016. For more information visit www.southernstylenow.com.

The home is filled with ideas for decorating your own “southern style” space, and if you aren’t in the area I hope you are inspired by my pictures which show how Southern design is being reinterpreted in 2016, one beautiful showhouse at a time.

Paloma’s design was inspired by the idea of a young southern debutante. “She is well-mannered, genteel, charming & educated…”

The walls were wrapped in the most exquisite custom DeGournay wallpaper, painted by hand with 12-carat white gold and aluminum on a silk ground. Truly a piece of art…

The relaxed linen drapery provides dressmaker detailing & a feminine touch to this sophisticated space. I love the seamless blending of old with new, from the Louis XVI seating to the modern, clean lines of the bedside lamps.

The color palette for this room was born from the striking custom dhurrie rug from Lisa Fine & Richard Keith Langham. The bedroom is a skillfully curated mix of period styling with modern-day riffs.

The centerpiece of the space is an Empire bed from Bunny Williams highlighted with a striking canopy of Quadrille fabrics.

Bengal striped chairs add an “old-money” Southern panache to the room. I love the classic touches throughout such as the Staffordshire dogs….

The custom rug in shades of brown, ivory & coral is the perfect contrast to the mix of antiques and modern elements.

The combination of the unexpected creates dazzling beauty in this upstairs bathroom by Florida designer, Laura Burleson. She “juxtaposed” wallpaper from Angie Hranowsky (see a previous feature on Angie here) with a custom chandelier by Julie Neill, an iron shower stool by Lucy Smith Designs, a Roman shade by Nicolas Chambeyron of Paris with a Lucite pedestal sink by LuxHoldups in New York.

This bathroom combines turn of the century sensibility with old world southern charm. All layered in refined details from the Whippet statue to the cascading window treatments.

The perfect combination of Southern traditional with modern touches define this den designed by Atlanta’s own-Brian Patrick Flynn. This stylishly casual space is skillfully layered in a neutral palette of white, navy & dark brown with boldly patterned pillows. A wall of carefully curated artwork by Celery Jones provides a sense of fun & effusive”hipness.”

The den is infused with subtle nods to the south, from the traditional lines of the occasional chairs to the fabrics from Thibaut.

The grand windows in the sitting room retreat are accented with luxurious glazed linen by Kerry Joyce Textiles. Seagrass rugs bring in texture, while lucite chairs provide a sense of chic sophistication and modern style.

A quiet corner, the perfect spot to sit and enjoy this southern sanctuary…

Very special thanks to Robert LeLeux, who produced this extraordinary event, and is also the brilliant visionary behind the Southern Style Now Festival. 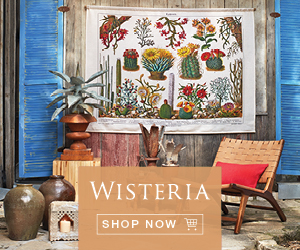